"You Your Best Thing": The Other Side to the Black Abortion Debate 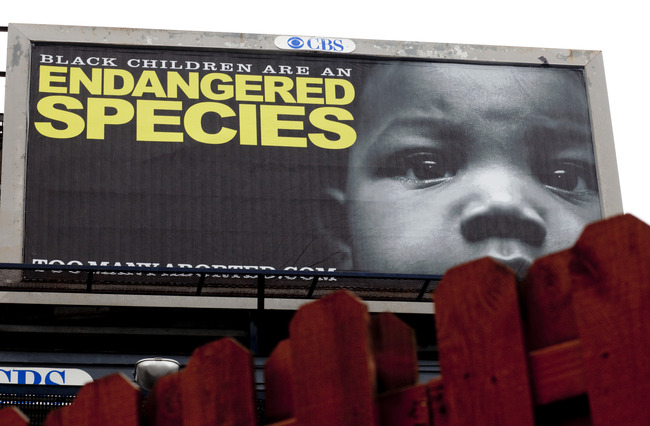 "You Your Best Thing," Paul D relays to a grief stricken and traumatized Sethe at the end of Toni Morrison's most touted novel Beloved. The physical embodiment of black women's self-sacrifice( she kills her daughter to protect her from experiencing slavery), Sethe responds incredulously--"Me?Me?"--as if the very idea that she held value beyond her role as a caregiver and nurturer for someone else was beyond comprehension. The fact that Morrison puts these powerful words in Paul D's mouth is certainly no coincidence.
Indeed, Morrison has written extensively about her self-consciously political narrative choices and authored a landmark study in Playing in the Dark that explores crisis of white identity as rendered through the creative, racialized imagination of white American novelists from Herman Melville to Ernest Hemingway. It matters that Paul D speaks these encouraging words to Sethe, not only because she loves and respects him, but because they share a history of unspeakable strife.
Raped by white men himself--a reality that he never utters aloud or fully comes to terms with emotionally--Paul D initially runs away from Sethe after learning of her infanticide because her bloody revolt and intense mother love hit too close to home. Unable to see his way clear of his own hidden demons and hold fully accountable the monsters that molested them both, Paul D casts Sethe as primitive and animalistic and heads for the exits. When Paul D circles back, he engages Sethe from the point of deep empathy, recognizing that the true culprit was pathological white supremacy and those who policed it; that her reaction of infanticide reflected the no-way-out calculus of black slave motherhood.
I raise this intense and poignant climatic moment in Morrison's Beloved, to introduce a rather glaring oversight in the current debate about black women and abortion that has erupted as a result of the recent antiabortion billboards that were erected in Atlanta. The billboard (pictured above)--which features a visibly distressed black baby and reads "Black children are an endangered species"--is designed for maximum cultural shock value.
Wanting to sound the alarm about an exploding abortion rate among black women in Georgia, the primary sponsor of the billboards--Georgia Right to Life--hired a black consultant in Catherine Davis who masterminded an effective political antiabortion campaign, framing the rise in abortion rates among black women as a white supremacist racial conspiracy. What makes Davis's conspiracy so dangerous and effective is that it is premised in part on the truth. That is to say, that the idea of exterminating and/or ridding the country of blacks goes back a ways historically.
Many whites--including one Thomas Jefferson--feared that if slaves were emancipated they would retaliate in violence, seeking payback for the harm done them under bondage (peep Notes On Virginia to get the R-rated version). Indeed, good ole' Abe Lincoln seriously contemplated a plan to have blacks shipped back to Africa to keep the Republic intact.
And, there were certainly white eugenics movements afoot in the early part of the twentieth century and several states, including North Carolina, during the first decades of the twentieth century were notorious for sterilizing black women without consent when they arrived at hospitals to give. Suffice it to say then that there was more than enough historical ammunition on Davis's side to undergird her conspiracy thesis.
What most disturbs me about Davis's political propaganda is that it covers over rather than illuminates the harsh socioeconomic realities of black women and motherhood in the U.S. As Morrison makes clear in her novel, black motherhood was thrown radically into crisis because of slavery. Laws were put in place so that enslaved black women's children--regardless of their paternal line--followed the social condition of the mother.
What this meant in plain speak is that white men could rape and impregnate their slaves without worrying about having to contend with legal claims of free status from their bastard offspring. To give birth then for enslaved black women was to incarcerate your children into bondage. Adding to this breeder status, was the always present reality that one's children would be sold away. There was thus an inherent danger attached to even loving one's child. Morrison's narrative captures this sentiment best when she explains that the coping mechanism of the enslaved was to "love small." Fast forward to the twenty first century and its clear that the vestiges of this thinking are still with us.
Though the term "welfare queen"--popularized by none other than Ronald Reagan during his 1976 presidential campaign--has fallen out of fashion, the image of the parasitical, baby-churning, unwed black mother is alive and well. Peep the recent events at University of California San Diego if you want proof. To bring the matter closer to home, I distinctly remember the cautious response that my then wife received when she disclosed to her family that she was pregnant with our first child.
Though we had been married for over 5 years, were economically stable, and both well-educated, her family--upon hearing the news--remarked almost to a person, "This is good news, right?" So accustomed had they become to seeing pregnancy as a death sentence for the women in their family that they were genuinely at a loss of how to respond when the pregnancy was planned and welcomed.
And here's another rub, a goodly number of the black women that opt for abortions have been sexually assaulted. The Oscar-winning movie "Precious" set many a black heads spinning because of its raw and unflinching portrayal of incest and black poverty (what will white folks think of us now), but it also ignited a desperately needed conversation about taboo subjects of intraracial sexual abuse and violence.
The toxic brew of racism, institutionalized poverty, and (culturally sanctioned) sexism, can much better explain the high and rising number of abortions by black women than lax racial consciousness. So, if there is indeed a racial conspiracy lurking out there threatening the black empowerment, we'd better start looking a lot closer to home.
Posted by David Ikard at 5:48 PM