In case you haven't heard--meaning that you have probably been living under a rock for the past month--there are a few things that are happening historically that need your immediate attention.  The Supreme Court is deciding whether to uphold the 1965 Voting Rights Act, making Southern states like Mississipi and Alabama--who have long and bloody histories of denying African Americans the right to vote--get fed approval before making any changes to their state voting practices/laws.  To be clear, the VRA was put in place because these states have historically legislated racial terrorism.

From poll taxes--which only applied to blacks--to draconian laws designed to intimidate black voters--like making people memorize the state's constitution or guess the number of jelly beans in a two gallon jug--, the states were not only complicit in this process of racial terrorism, they were by all accounts the driving force. 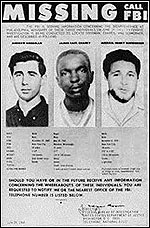 While it makes perfect sense to me to end laws that are no longer needed (shout out to Mississippi for finally making it officially legal in the state not to own slaves), it is irresponsible and indeed dangerous to eliminate laws, especially ones that protect American citizens from state-sponsored terrorism, without careful deliberation.

If the Supreme Court errs here, it should certainly be on the side of protecting freedom, not caving to claims of federal government overreach or the notoriously racist claims of states rights.  The voting debacle that took place in the last presidential election cycle, of which Florida--the state in which I now reside--was a primary culprit in trying to suppress the black and Democratic vote, should reveal the pressing need to keep such federal laws/mandates in place.

The problem is that we have been conditioned to see racism as passe, the election of the first black president for two consecutive terms just added fuel to the fire of this dangerous myth.  Tell the 1.4 million black men in prison that we are post-racial or peep this: "Today, 1 in 15 African-American children and 1 in 42 Latino children have a parent in prison, compared to 1 in 111 white children. In some areas, a large majority of African-American men – 55 percent in Chicago, for example – are labeled felons for life, and, as a result, may be prevented from voting and accessing public housing, student loans and other public assistance."

And, no, black and brown men are not pathologically criminal.  What they are is systemically targeted--that is, they are not committing more crimes than white men or, for that matter, doing more drugs or handling more firearms (go to the white surburbs if you want to know where all the guns are in our society), they're simply being convicted at much higher rates than their white peers for the largely the same crimes.

In a word, if you're poor and of color, you are prison bait.  Plain and simple.  And, as Michelle Alexander so brilliantly argues in The New Jim Crow, mass incarceration is the new form of black political and economic disenfranchisement.

Given that our impulse as Empire is to forget that which challenges or contradicts whites' will to power, it is hardly surprising that important debates--like the one before the Supreme Court discussed above--tend to be ahistorical and grounded in emotion rather than fact.  Have we come along way since that historic ruling against voting suppression in the South.  Of course.  No one is debating that, but there is a distinct difference in moving in the right direction and arriving at one's destination.


So to the folks out there who think that any invocation of race to address matters such as these is an act of "playing the race card," which seemed to be a recurring them in the comment section of a piece on CNN I was reading this morning about the Emory U's racial problems, including the asinine comments of the University prez, James W. Wagner, I say do your historical homework.

If we're being real, whites invented the race card (can you say legacy admissions, the prison industrial complex, and corporate welfare or slavery, Japanese internment camps, and Native American genocide).  Now, racial privilege, which blacks folks have never historically benefited from (and, for the record, Affirmative Action is a corrective to white male supremacy not racial privilege) is somehow magically the domain of black and brown folks.  The growing wealth gap between whites and black/brown folks blows that argument up.  White hegemony is a mofo.

Nobody wants this country to be post-racist more than black and brown folks.  Trust me.  But the extant reality of institutionalized racism and structural inequalities keeps getting in the way.  So enough with the race card rhetoric already.  Its insulting and historically absurd.
Posted by David Ikard at 7:50 AM No comments: