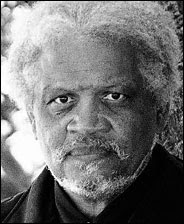 In case you haven't received the memo, noted satirist Ishmael Reed is not terribly fond of the Oscar Nominated movie "Precious" based on the novel PUSH by Sapphire. My guess is that most folks became aware of this reality when Reed lampooned the movie in an op-ed article “Fade to White” in the New York Times recently.

But the truth is (and I'll return to the op-ed piece in a moment), Reed has been fuming over this movie for quite some time--his op-ed essay being the culmination of a virtual campaign against the movie. In an earlier rendition of this New York Times piece "The Selling of 'Precious'"--which is decidedly more venomous--Reed rants,"New York Press critic, Armond White, in a brilliant take down of the movie, compares it with Birth of a Nation. I would argue that this movie makes D.W. Griffith look like a progressive. Moreover, I’ve looked at a number of pictures that show how the Nazis depicted blacks and though Jewish and black men appear as sexual predators in many, I’ve never run across one in which minority men are shown as incest violators."

For anybody that knows anything about Griffin's "Birth of a Nation"--which offers a heroic portrait of the KKK as protectors of democracy and white women's virtue and black men as primitive, violent, white-women-raping, monsters--Reed's declaration is nothing short of absurd. And, what of all those black women who happen to find political value in the movie--particularly in its engagement with the taboo subject of incest? Reed surmises that these women are most likely uninformed black feminist literature professors with secret vendetta's against their fathers and black men in general. And, oh yeah, they happen also not to be that smart. Reed's rants would be laughable if such views and tactics of political posturing weren't still so viable.

Indeed, the made-for-public-consumption version of the essay--the aforementioned "Fade to White"--was one of the most viewed essays on the NYT website the other day. Gone were the blatant attacks against black women intellectuals and outlandish references to "Birth of a Nation." Reed--who has accused folks like Henry Louis Gates of "house niggerdom" and trying to speak for the race--pulls off his on version of black spokespersonship.

The debate around the movie "Precious," he informs the overwhelming white, affluent readership of the New York Times (who's shucking now), runs starkly along racial lines. Black folks hate it, of course, because it pathologizes blackness and lets white folks off the hook for perpetuating racial inequalities, and white folks love it--including the political right (Barbara Bush, et al)--because it reinforces the paternalistic white savior/black primitive discourse dating back to slavery. So how does Reed's us/against them binary explain the legion of black folks and black women in particular that identify with the movie's characterization of incest and sexual abuse? Simply put, it doesn't. That is, not unless you believe that all black folks think alike, which apparently Reed expects us--or precisely the mostly white readership of the New York Times--to believe.
And, check this. Reed went attack dog in the comment section on my boy Mark Anthony Neal when, in an essay on his Newblackman blog, he deigned to call the brotha out on his shallow racial politics and patriarchal assaults against black women intellectuals.

Like a school yard bully, Reed kept trying to "feminize" Neal by asking him rhetorically "Aren't you in the women studies department at Duke?" Translation: "You clearly have no legitimate point of view in this debate because your masculinity has been compromised via your feminist and thus self-hating politics." And, here's the rub. Reed's point about white fascination with black pathologies is NOT completely off the mark. As, in fact, Neal, Bakari Kitswana, Gwendolyn Pough, Tricia Rose, Robin D.G. Kelley, Michael Eric Dyson, Jelani Cobb, and others have rightly argued, this white investment in discourses of black pathologies continues to be bankable, including in, of all places, hip hop music and culture.

Personally, I see this dynamic at work, if not in the movie "Precious," certainly in the novel upon which it is premised in PUSH. The pressing question is, and this is something that Reed fails to consider, to what extent can Sapphire--or any black writer for that matter--anticipate how their art will be manipulated in the public domain? Dave Chappelle sure didn't see it coming when his "Chappelle Show"--which from its inception pivoted on a decidedly anti-establishment and anti-racist theme--mainstreamed (read: entertained even racially-biased whites) to the point that Chappelle feared he was perpetuating the very pathological themes of blackness his show was ostensibly created to parody. And, when Chappelle walked away from the show and the 50 million dollar payday from Comedy Central, he was deemed "crazy" by a good many folks, including blacks in showbiz that should know better.

It is ridiculous then to conflate Sapphire's or Chappelle's artistic intent with how their art is being appropriated by various groups. As Langston Hughes' famously noted in his essay, "The Negro Artist and the Racial Mountain," black artists should not be held hostage to the political demands placed on their art within or beyond the black community. Bucking the "art-as-propaganda" mindset advocated by none other than the intellectual giant, W.E.B. Dubois, Hughes was not saying that black artists have no political responsibility whatsoever, but rather that theirs is to tell a truth beyond the prescribed limits of the political discourse.

What Hughes realized was that creating and perpetuating plastic versions of social realities reinforces rather than challenges the status quo. (There are, in fact, some lowdown colored folks. Surprise. Surprise. And institutionalized racism ain't the primary cause of their lowdown behavior.) One need only peep Herman Melville's Moby Dick or Benito Cereno to witness the emotional and psychological damage that white supremacy, for instance, has wreaked onto white-identified folks. Truth-telling, however unflattering, is ultimately the path to emotional healing and intellectual growth.

To wit, Reed's argument that white folks are guilty of incest too is fundamentally beside the point of both the novel and movie, both of which try to stimulate an important and necessary intraracial conversation about this enduring yet unspeakable reality in the black community. Will some white folks come away with a different and perhaps even dangerous interpretation than was originally intended by the artist/film maker. Absolutely. But therein lies the risk--not only of black art--but of artistic expression in general. Misinterpretation--deliberate and otherwise--just comes with the territory. One would think Reed--of all people--would get this dynamic considering his illustrious career as a novelist. That he doesn't is perhaps the biggest travesty of all.